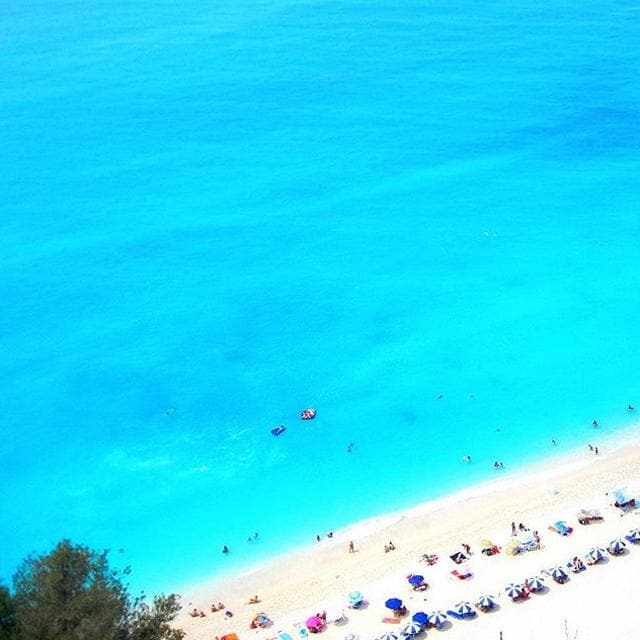 Lefkada, Greece
If paradise was a colour, it could be the striking light blue of the water at Egremni Beach on the Greek island of Lefkada. The island is located in the Ionian Sea, and Egremni, on its south west coast, is one of its longest beaches at 2.5 kilometres.

Lefkada is the birthplace of the Greek goddess Aphrodite and the site of Sappho’s suicide. Porto Katsiki is another favourite beach on the island. The name translates to ‘Port Goat’, as formerly only goats could reach this area. Located on the west coast of Lefkada, it is accessible via approximately 80 steep steps down a remarkable cliff.

Panarea, Aeolian Islands, Italy
The idyllic sleepy island of Panarea, located north of Sicily, is accessible only by boat. A UNESCO World Heritage Site, Panarea is the smallest of the Aeolian Islands. Transport on this boho chic island consists of golf carts or Vespas but most people choose to walk. Don’t miss sunset drinks at Hotel Raya, dinner at Da Pina and, if time permits, custom-made sandals at Moda Mare.

Take a day trip to Isola Di Basiluzzo for a swim and head to neighbouring Stromboli, a volcanic island and much-loved home to Dolce and Gabbana, for a late dinner. On Stromboli, the tiny village of Ginostra (with a population of 40) is a must-see. Located at the opposite side of Stromboli to the main settlement, the vibe is slow and peaceful with a couple of restaurants and donkeys for transport. Stargaze your way back to Panarea.

Montenegro
There is much to do in this tiny Balkan paradise. The enchanting village of Perast, nearby man-made island Our Lady of the Rocks and the UNESCO-protected, medieval walled town of Kotor are must sees. If cobblestone streets lined with cafes, churches and museums isn’t your thing, then don’t miss Tara River Canyon – at 82 kilometres and surrounded by 1,300-metre cliffs, it is the deepest canyon in Europe.

Head to Porto Montenegro, which, at 250 metres is the largest superyacht berth in the world, for lunch, drinks and shopping.

Located close to Budva, the long stretch of sand at Jaz Beach hosts an impressive line-up of live music in the summer – Madonna and The Rolling Stones have played here.

Connected to the mainland only by a narrow walkway, Aman Sveti Stefan was once a fortified village dating back to the 15th century. Reminiscent of a fairytale, it has since been converted into a luxury hotel and is definitely one for the bucket list. The cottages are inspired by authentic Montenegrin fishermen’s homes and feature lanterns in each window. The lanterns are a tribute to the fishermen’s wives who used the light to help guide their husbands home safely from the sea.

Chengdu, China
A city of over 14 million inhabitants, Chengdu is the capitol of China’s Sichuan province. It is a UNESCO City of Gastronomy and home to delicious Sichuan cuisine, featuring the hot and numbing Sichuan peppers.

The surrounding area, Chengdu Plain, is known as the ‘Land of Abundance’ and the ‘Country of Heaven’, with more than 70 per cent of the world’s panda population found in the area.

The Giant Panda is a national treasure and you can observe them enjoying their favourite pastimes: sleeping and eating. You can head up high in the mountains, and even volunteer for the day as a panda keeper.

There are many festivals to attend in Chengdu such as Grand Temple Fair, Lantern Festival and Huanglongxi Fire Dragon Festival, as well as Monastaries and Temples to visit including Qingyang Temple, considered to be the birthplace of Taoism’s founder Lao Tzu.

Chicago, USA
Located in the state of Illinois along Lake Michigan, Chicago – fondly known as the windy city and Chi-Town – is one of my favourite cities in the USA.

Home to the renowned basketball team Chicago Bulls as well as arguably the best burger in the world (Au Cheval), the city boasts a vibrant arts scene, amazing museums and popular upmarket shopping strip The Magnificent Mile. You will find Millennium Park located in the heart of the city, set against an impressive architectural backdrop. Don’t miss The Chicago Architecture Foundation River Cruise – you’ll get the lowdown on the city and buildings such as Willis (Sears) Tower, Merchandise Mart, Marina City and Aqua.

Be sure to try their deep-dish pizza and the classic Chicago-style hot dog.

Maria Paradisis offers a glimpse into her many discoveries – think pristine beaches, first-class cabins and plush hotel suites – via her Instagram account, @whereintheworldisparadise.