Low gas prices mean buyers are willing to pay for the comforts of home on wheels. USA TODAY reporter Trevor Hughes takes you inside one of the nation’s largest RV shows. Trevor Hughes/USA TODAY 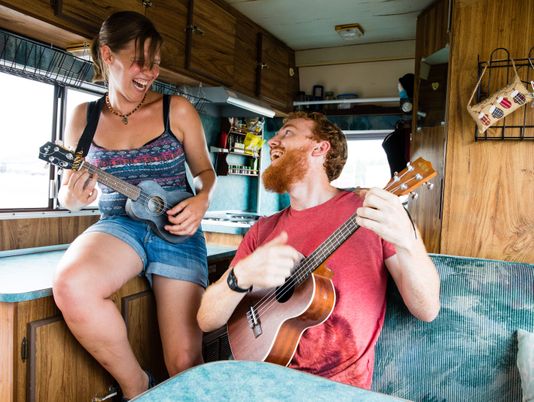 Route 66 connects people from all across the globe. Travelers Natalie Rayner and William Barnett play the ukulele inside their RV as they venture across the Main Street of America.(Photo: David Kafer)

In 2015, Jessi and Valerie Smith took a radical step toward downsizing.

The couple, both 30 at the time, decided to trade in their three-bedroom San Francisco home to take up residence in an 8-square-foot TAB Teardrop camper.

There were a few growing, or in this case, shrinking, pains. They would bump their heads on the low ceilings and grew weary of having to convert the bed into a living area each day. But they both agree that it was the best decision they could have ever made.

“It probably wouldn’t work for everyone,” said Valerie, “but it actually brought us closer.” 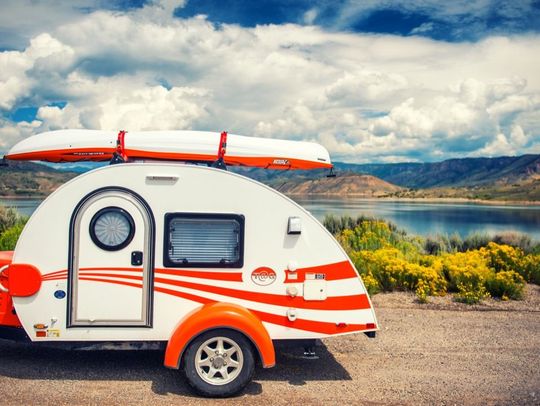 The pair who document their travel adventures on a blog called Happy Camper Wives are among the young adults who are embracing a new, hip wave of travel trailers. They are setting themselves apart from the stereotypes of legions of families and retirees in fancy motorhomes and their more traditional RVs. These fashion-forward trailers are aimed directly at design-conscious millennials.

From small, app-connected campers with retractable flat-screen TVs to solar-powered cabins on wheels, young adults can find an influx of innovative travel trailers geared specifically toward their interests.

“We have been targeting the millennials over the past few years in an effort to help them understand how RVs fit with what they already enjoy doing and that RVs aren’t the stereotypical vehicle they might imagine … and it’s working,” said Karen Redfern, a vice president for Go RVing, an industry promotion group.

The smaller trailers are in keeping with the small-home movement that has also been proving popular among millennials. But the trailers, unlike the homes, are made for people who want to stay on the move rather than settling in one place for awhile. And because they are small, they don’t need big pickups or other full-size, thirsty vehicles to pull them.

Like every generation before, millennials enjoy the outdoors. However, technology plays a big role in how the young adults access vital travel information.

“The millennial generation is probably the most mobile generation that the world has ever seen,” said Kevin Broom, Go RVing’s director of media relations.

More Money: Millennials are making investment mistakes with their savings

“They want to be able to share their experiences using social media. They want to find the best restaurants in the area. They want to know what interesting spots are off the beaten path. All that stuff is on the internet, so they need updated RVs that have that type of connectivity,” Broom said.

There’s been a wave of niche brands stepping up to offer the high-tech features, flexibility and connectivity that adults under 35 desire – most of which are at prices early career adults can afford.

“It’s a natural evolution,” said Sherman Goldenberg, publisher of RV Business and Woodall’s Campground Management magazines.  “Millennials are interested in spending time outside. That has generated a spur in demand for smaller, towable recreational vehicles.”

Here are five of the coolest RVs on the market this year: 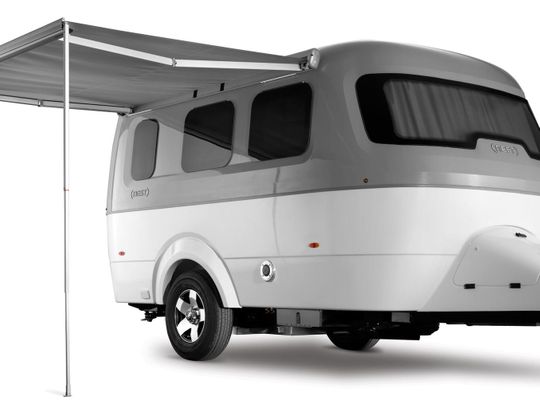 With its fiberglass body and automotive styling, the new Nest by Airstream doesn’t look like anything Airstream made before. (Photo: Airstream)

This fresh take on an old idea is available in two compact models. Both with plenty of inside storage, the Nest includes a microwave, two-stove burner and a bathroom.

“We’re seeing this group of people who are kind of tired of the big home and the big car,” said, Justin Humphreys, chief operating officer of Airstream. “Small is the new the big. Committing to less frees them up for more outdoor experiences.”

At 3,400 pounds, this fiberglass travel trailer is midsize-vehicle friendly. With a minimalist design, it “appeals to the crowd that grew up on Apple,” Humphreys said. 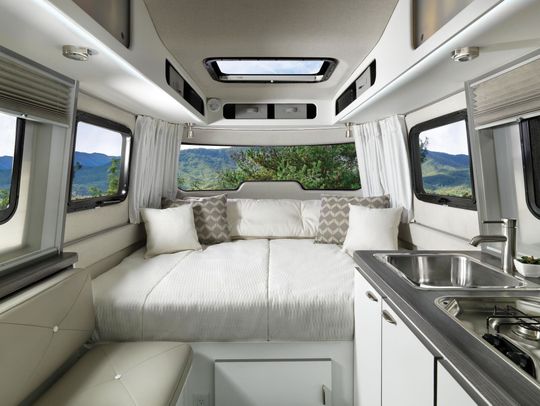 Nest is compact and lightweight. Its floorplans pack in a surprising amount of features and amenities (Photo: Airstream)

Using a smartphone app, users can adjust the colors of the interior lighting to completely change the vibe. Nest starts at $45,900. 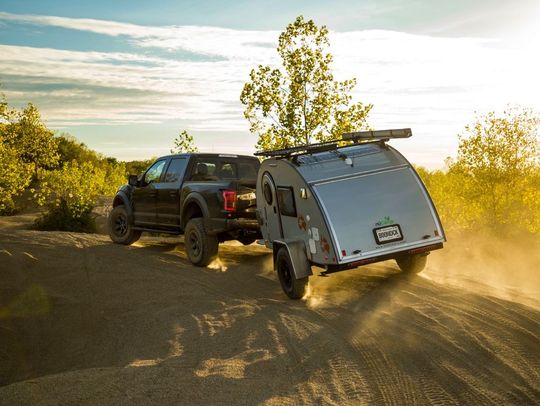 TAG Teardrop Trailers are manufactured by nüCamp RV in Sugarcreek, Ohio, in the heart of Amish Country. (Photo: nucamp)

At 2,900 pounds the BoonDock by NuCamp was designed for off-road adventures. Compact and built with knobby off-road tires, millennial adventurers can easily take it onto the back roads.

“We’ve seen a giant uptick from the younger market,” said Scott Hubble, CEO of NuCamp. He said towability, though not sexy, is the single most important feature for young adults.

“Large RVs aren’t easy to move. Where do you even park? You definitely don’t want to drive anything 20 feet long into a big city; it’s a nightmare,” he said. “Something this size you can store in your garage.”

And starting at $15,000, it’s intended to be affordable for people who are still early in their careers. 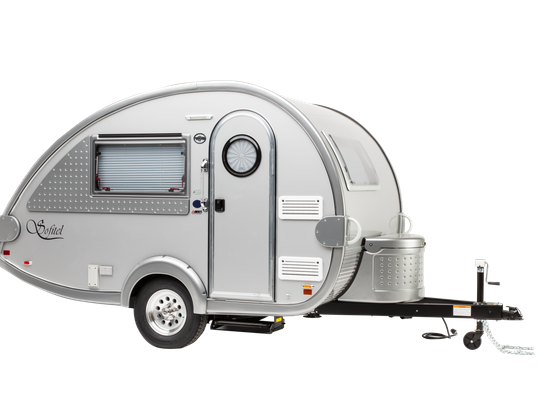 Coated in a silver metallic paint with custom alloy wheels and decals, the Sofitel Package by NuCamp is designed for a glamorous camping experience. (Photo: NuCamp)

The TAG Teardrop also comes in a deluxe model called Sofitel that’s more suited for people interested in “glamping,” or glamorous camping. The Sofitel package is coated in a silver metallic paint and has upscale cabinetry and hardware. 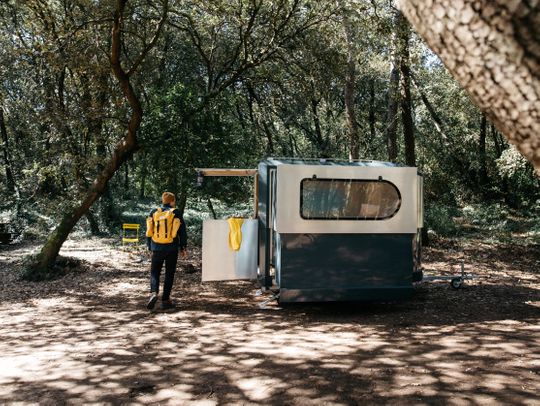 The Travel Machine was launched by a in 2018 French Startup Tipoon. (Photo: Tipoon)

Made by a French startup, the Travel Machine is a movable pod that expands to three times its original size with a click of a remote control. The pod is built for those who value spending quality time with others, providing space and comfort for up to four people.

“Tipoon is the perfect match for a young couple, because it’s small and can fit into a garage, so you can decide last minute to go away,” said Charlie de Lavaux, co-founder of Tipoon.

As a millennial himself, Lavaux says that his age is what drove him to focus on creating a vehicle geared toward younger adults. 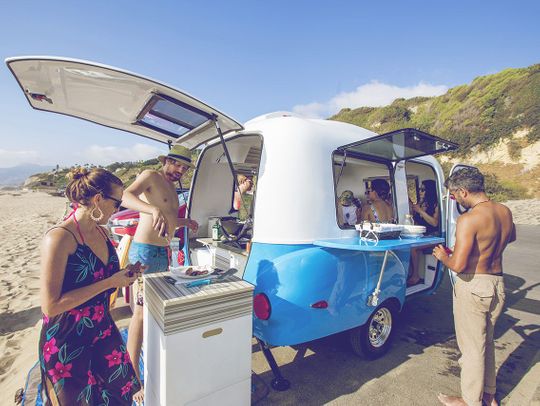 The modular floor of the HC1 is made of 1.5″ thick honeycomb fiberglass. (Photo: Happy Camper)

“(Millennials) are wearing all these different hats,” said Ryan Edwards, co-founder of Happier Camper. “They want to be a camper during the weekend and an entrepreneur during the week.”

The Adaptiv modular system in the HC1 by Happier Camper allows for a number of interior configurations, so it can be used as a mobile office, sales space or camping unit. The founder also said that the tongue of the 13-foot-long solar-powered camper is removable so that it can fit into the standard 10-by-10-foot space allowed for flea markets and trade shows. 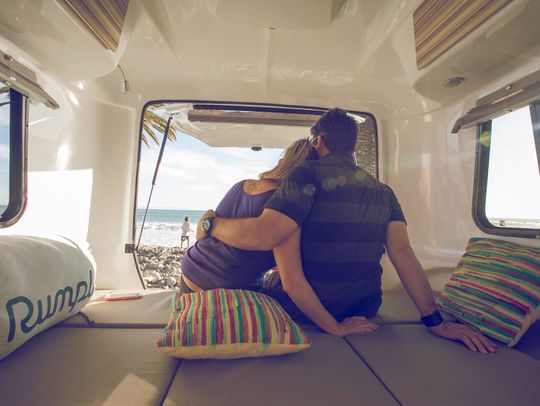 The HC1 fits in most garages and parking spaces. (Photo: happier camper)

“They’re not just buying one product. (The HC1) is something that can fit in every aspect of their lives,” Edwards said.

In addition to a flexible interior, the camper weighs 1,100 pounds so it’s towable by most vehicles.The starter package starts at $24,950. 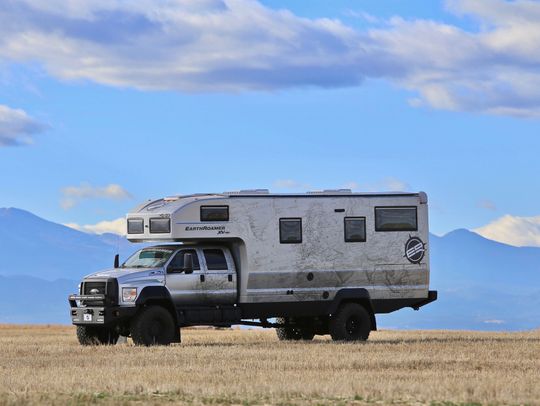 The EarthRoamer XV-HD was designed for adventurers who seek quality, craftsmanship and ample space. (Photo: EarthRoamer)

This one isn’t a trailer and its super-pricey, but it’s worth mentioning for those who truly want to live off the grid. The EarthRoamer is the ultimate self-sufficient expedition vehicle. Solar-powered and built to take on all four seasons, the XVHD is built to custom in Colorado for those who really want to spend their life on the road.

Created to easily fit a small family, this 33,000-pound vehicle is equipped with floor heating, two roof-mounted air conditioners and a large auto-retracting awning. A touchscreen master control center is ground zero for adjusting the hi-tech features. Prices for the EarthRoamer XVHD start at $451,000.

The Best Edinburgh Travel Tips From Our Readers